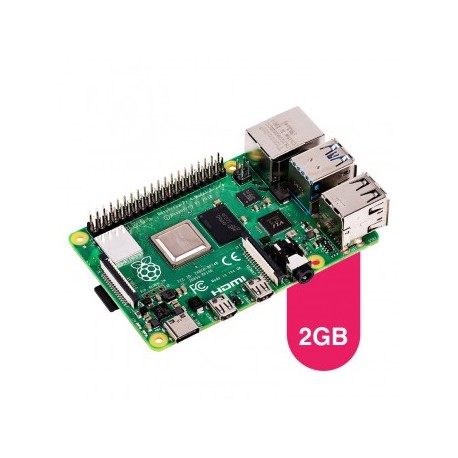 The Raspberry Pi 3 Model B is the third generation Raspberry Pi with a 64-bit 1.2GHz quad-core processor, 1GB of RAM, WiFi (b/g/n), and Bluetooth 4.1!

This product is no longer in stock

Notify me when available

The Raspberry Pi 3 Model B is the third generation Raspberry Pi with a 64-bit 1.2GHz quad-core processor, 1GB of RAM, WiFi (b/g/n), and Bluetooth 4.1!

With the ARMv8 processor it can run the full range of ARM GNU/Linux distributions, including Snappy Ubuntu Core, as well as Microsoft Windows 10 IoT edition.

You will need the latest NOOBS image (1.8.0) for the Wireless LAN and Bluetooth drivers to be installed.

Compared with the Raspberry Pi 2 the CPU is running at a 33% faster clock rate (1.2GHz vs 0.9GHz) the more modern core also means a more efficient instruction set, especially when performing operations on 64-bit values.

Video and 3D performance has also seen a bump with the VideoCore being clocked at 400MHz for video processing (up from 250MHz) and the 3D graphics processor running at 300MHz (up from 250MHz).

In general use you can expect the Raspberry Pi 3 to perform around 50% quicker than the Raspberry Pi 2 running the same software. In the future as software adds optimisations for the architecture the gap will widen further.

Wireless LAN, Bluetooth, and oh my!

The biggest change is the inclusion of integrated Wireless LAN and Bluetooth 4.1 on board adding two great connectivity options straight out of the box. The Wireless LAN should be compatible with all home network setups and is supported in the latest NOOBs image.

We've achieved speeds of around 40Mbit/sec using the new built in adaptor which is similar to the speeds we see with USB Wi-Fi dongles in the same setup.

Bluetooth will allow you to use a wireless keyboard/trackpad without extra dongles, keeping things nice and tidy.

No customer reviews for the moment.